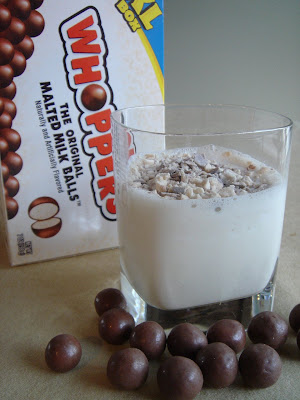 I was the queen of “make believe” when I was a kid. The youngest of 3 girls, I was always left out on the sidelines so I had no choice but to make up my own fun.

When “Willy Wonka and the Chocolate Factory” came out, my imaginary brain would run in wild circles on what I would do if “I” got the golden ticket…I can tell you…I would probably be the one in the middle of the chocolate river. I’m just sayin’.
So in the midst of make believe and wishing I was a kid again, I saw a recipe for a Malt Milkshake in my May, Bon Appetit Magazine. (If you don’t get this mag….get it. It will never ever disappoint) AND since I made whopper cookies last week….I was lucky enough to have 2 boxes of Whoppers still in my pantry just begging to be used.
This was just what I needed to wash the ‘real’ world away…

For all my Whopper loving readers…this is for you.

Directions:
In a blender, add milk, half and half, ice cream, and liquor. Blend until smooth.

Meanwhile, put Whoppers in a Ziploc bag and beat with a wooden rolling pin or mallet.

Pour milkshake into classes and top with Whoppers. Serve immediately.
Pin It
Posted by Sweet as Coco at 8:35 PM

There is something therapeutic about taking a meat mallet to a Ziploc bag full of whatever ingredients to really help relieve stress.

Jeff- Ditto that. I always have a mallet and ziploc bag handy.