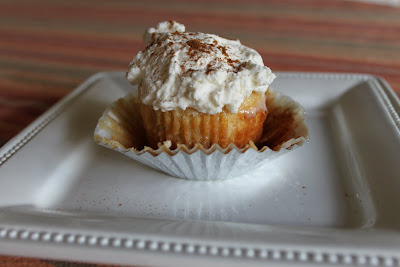 I wanted to celebrate this year...with many things. Unfortunately, I was able to only make just one of them. Tres Leches Cupcakes.
The first time I had tres leches cake was the night I went into labor. (No, I don't think it was the cause, rather, a major coincidence!). I loved it so much, I devoured it as if it were going to be my last meal, little did I know, it would be the last I WOULD have for 3 LONG days!
I remember the cake as being tender, and very moist. Heaven.
While on my hunt for a recipe, I pulled out several of my cake books (I think I have about 10). Two of these books had a recipe for tres leches. Martha Stewart's Cupcakes, and Cake Love. I researched both recipes and ended up going with Cake Love's. I think its because it had a ton of ingredients and I felt that if it had that many intricate details--it probably was the best bet. For most, I am sure, MORE ingredients would probably turn you away. Me? I have just about every ingredient imaginable in my pantry. It's a joke at my house that I have so much that if the grocery store doesnt have it...they call me for it.
Anyway, while these were actually pretty easy to make, I must say I was rather unimpressed. Actually, I was really disappointed. The cake turned out DRY and dense. Certainly not someting I look for in a cupcake, much less a cake that is known for being pretty wet in texture. This cake was so dry, it felt like it stuck in my throat. The only tres leches about this would be the 3 glasses of milk I would have to swallow just to get it down! ha! The problem I think was the method--the only milk the cake was actually soaked in was the sweetened condensed milk. Anyone who has worked with sweatened condensed milk knows how sticky it is. It just sat on the top of the cupcake instead of absorbing it. Such a bummer! I may have to try Martha's recipe next time. If anyone has tried it, let me know how it is! Sorry Cake Love, I just don't feel the love for these cupcakes. But I do still heart your frosting recipes! :)
I am not going to post the recipe--If you really want it after my review, email me at detroitfoodexaminer@gmail.com
Happy Cinco de Mayo anyway!
Posted by Sweet as Coco at 5:43 PM 5 comments