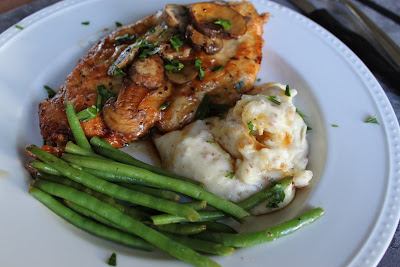 Planning ahead can be really tough when you are busy.  Sometimes I get caught up in all the other tasks of the week that I can't be bothered with sitting down to write a menu for the week, plus a shopping list that I will probably forget or lose at home anyway.
This week, was just one of those weeks.  I came off a busy weekend and I needed to just live with using what was in my refrigerator and pantry.  I usually have chicken breast in the house, a few potatoes and an array of vegetables to chose from.  Since my mushrooms were at risk of biting the dust soon if not used, I decided to make chicken marsala....something I haven't made in ages.
What I liked about this was that it didn't dirty up a ton of my dishes, and I could do most of the work (pounding the chicken) while my daughter was sleeping.  Then, all I had to do was dredge in a seasoned flour mixture and saute.  Easy peasy.
Chicken Marsala
recipe by:  Cafe Coco
2 chicken breasts
1/4 cup flour
1 tablespoon dried basil
1 teaspoon salt
1 teaspoon freshly ground pepper
8 oz mushrooms
1/2 cup dry marsala wine
3 tablespoons butter
4 tablespoons olive oil
Serve with: mashed redskins, and hericot vert if you would like.
Directions:
Rinse chicken breasts, and pat dry.  Beat with a mallot in between sheets of plastic wrap until chicken breasts are 1/4" thick.

Mix flour, basil, salt and pepper together and spread on a large dish.  Dredge each chicken breast in flour on both sides, shaking off the excess.  Set aside.

Preheat a large skillet.  Add butter and oil.  Once pan is hot and butter is melted, add the chicken breasts. Cook until chicken is brown on one side (about 3-4 minutes).  Flip.  Cook for about 2 minutes, add mushrooms.  Cook for 2 minutes, then add marsala wine and stir mushrooms around.  Cover and simmer on medium for about 8-10 minutes.  Check on the chicken to see if it is done.  Pour sauce and mushrooms over the top of chicken.  Serve.
Posted by Sweet as Coco at 9:14 AM 0 comments 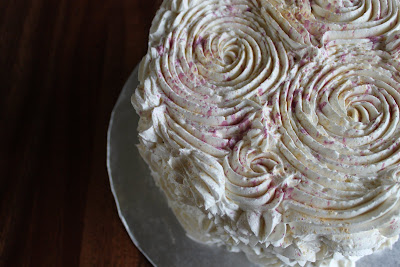 After a very busy weekend of making the lady bug cake for my friends shower, I was asked to bring the birthday cake for my other friend Leslie to our women's wine tasting club.
I was short on time and energy, but I still wanted my cake to be a show piece.  Even though I need a bit of practice with the roses and piping, I think it turned out really cute.  I stole the idea from my friend over at Dolce by Dana.  I topped it off with some pink and gold disco dust.  Another thing I need a bit of work on!
I think it was enjoyed by all!  The cake was my go to Valrhona chocolate cake, and was filled with a raspberry yolk-based meringue buttercream, then topped with vanilla swiss meringue buttercream. 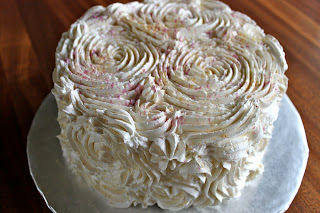 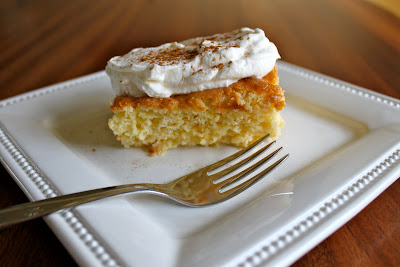 Ok, that is four.  But seriously, this cake is shout it from the street good!

Last year, I made tres leches cupcakes that were not only dry, but sticky.   A true disappointment since this cake should be extremely moist.  This year, I went simple and went with a recipe from "The Joy of Cooking".  There weren't a ton of ingredients and this took me about 10 minutes to put together.  In my book...there is nothing more simple!

Not only is this cake moist like a sponge when you bite into it, but it melts in your mouth!  I know this cake traditionally has maraschino cherries on top, but truthfully, I don't like them.  I put cinnamon on the top, instead.  In fact, the first time I had this cake, 2 years ago at Forest Grill in Birmingham (February 20th to be exact) it also had cinnamon on top, and was so amazing, I went into labor.  (I know...it wasn't the cake...just sheer coincidence, but it's something I will always remember as being 'my last meal').

This cake will definitely have to be on a rotation because to bust this cake out for only Cinco de Mayo would be too sinful.

Now, GET OUT of here and make this cake! 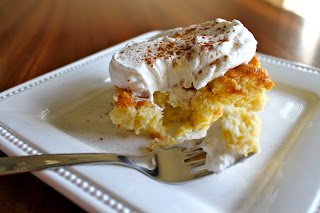 Tres Leches Cake
recipe derived from: "The Joy of Cooking"

Fold the dry ingredients with the egg yolk ingredients just until about combined.  Then fold in the egg white mixture in 2 portions.  Fold gently, just until the whites are mixed in.

Pour batter in a greased 9x9 pan or 11x7 pan.  Bake for about 25-30 minutes until a toothpick comes out clean and cake springs back.  Mine took about 28 minutes.  Let the cake cool for about 10 minutes in the pan.  Poke holes in the cake about an inch apart with a toothpick.  Pour 3-milk mixture over the top, leaving about 1/8th of a cup leftover (I did because it seemed to be soaked enough) making sure to get all the corners and sides.  Cover pan with plastic wrap and put it in the refrigerator for an hour or overnight.

Slice squares and plate.  Top with Chantilly cream (recipe below) and sprinkle cinnamon on top, serve immediately after topping with cream. 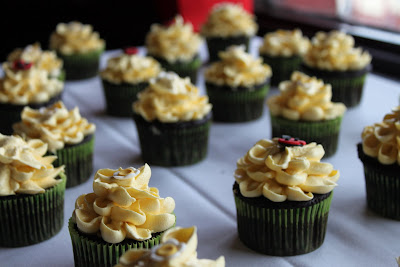 I made these cupcakes for my friend's shower this weekend in order to fill in the gaps of additional guests.
At first, I chose cupcakes because, typically, they are relatively quick and easy.  Of course, while researching "You Tube" for some decorating techniques for the cake, I found this cute little technique and decided, I had to try it!
Fast forward to the day before the party, I was in full force cake decorating mode.  I get my bag and tip together (a Wilton 124 tip) and discover I had a major problem.  A left handers problem.  Crap.  Why didn't I think of this while I was at the cake store?  Surely they were now closed.  I was going to have to get handy with my right hand, or convince my husband to do it.  I decided that me using my right hand to pipe the frosting was probably my best bet.  By the second cupcake, I had carpal tunnel. (Seriously, my wrists are hurting from rolling out all the fondant from the cake).  Then, the light bulb went off....I could use my left hand, I just had to work in the opposite direction.  From then on, it was smooth sailing.
What I love about these cupcakes is that they look like a flower!  They are so cute and look great with the lady bugs.  These cupcakes were a true hit with all the guests, especially the kids!  I will surely use this technique again!
I used my go to chocolate cake, and this vanilla buttercream.
Posted by Sweet as Coco at 10:11 PM 2 comments 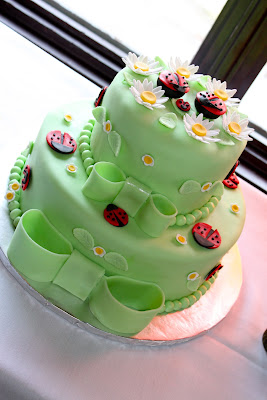 This past week has been 'adventures in cakeland'.  One of my good friends was having a baby shower and I offered to make the cake.  At first, it started out for a group of 50, which quickly turned into 75.  No need to panic....its nothing that a few cupcakes couldn't fix.  In the end...it was one cute dessert display.

Now, most people wouldn't offer to make an extraordinary cake like this on their own free merit.  But if you knew my dear friend....you would definitely understand why.

Besides being one of the nicest people I have ever met, she is so genuine, so kind, and very fun to talk to.  We met while standing up for my cousins wedding and got to know each other on a 3-hour car ride to the bachelorette party, which ended up being a 4-hour car ride after we missed our exit, completely consumed in conversation.   We've been friends ever since.  It's so interesting how people come into your life.

When I asked her what kind of cake she would like for the party, she said, "Don't worry about being gender specific, I just want a happy spring-y cake."  As for flavor-she wanted my vanilla bean white cake (one of my personal favorites).  I decided since there were so many people, we would add a small chocolate layer and chocolate cupcakes, also.  Last minute, I added raspberry puree to the swiss meringue buttercream filling.  Just a nice added touch, and something I knew my friend would never ask for, herself.

When doing some 'google' image searching, looking for inspiration, the first image that popped up was this cake.  You know that feeling?  The feeling you get when the hair stands up on the back of your neck?  I got it.

My friends father passed away before I knew her.  I knew they were very close and she once told me how lady bugs reminded her of her dad.  She said that whenever she had a bad day, she would see a lady bug (even in the dead of winter when lady bugs shouldn't even be around) and she just knew it was her dad saying "It's going to be okay."  I had forgotten about it, until I saw this cake.  I knew....I had to make it.  It didn't matter if it took me 2 weeks.  I was making it.

I started the Wednesday before the party--just to be certain there weren't any mishaps.  I made all of my lady bugs, leaves, and flowers first.  Then I worked on the homemade fondant, cake layers, swiss meringue buttercream, and raspberry puree.  Then I frosted and assembled each layer the day before the party, and assembled the entire cake and decorated it the morning of the party.

Of course, I pulled up to the restaurant, at the same time 'the mom to be' did.  I had to tell her to take a hike, because I didn't want her looking at the cake just yet!

By the time I got the cake in, and set up, she was busy mingling.  I was sweating.

I was a bundle of nerves.  First, I was afraid that I was going to drop the cake while walking up the stairs.  Then, I started asking myself crazy questions like:  What if she doesn't like it?  What if she gets to upset over the lady bugs, Is this thing leaning??

Who knew cake would have such an impact....

It really is more than just cake. 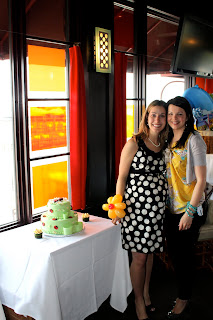