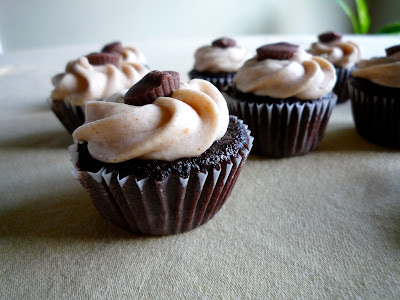 I let my pregnancy cravings get the best of me one afternoon and decided it was a good idea to make not only one kind of cupcake...but two (see my anniversary cupcake).

As luck would have it, I had to go to a gym opening that evening, and I told my trainer I would bring a dessert. (I know...who brings a dessert to a gym opening besides me?) But regardless, he was grateful. Plus, maybe he 'gained' a few clients ;)
My thoughts were that I would just make mini cupcakes. That way, people are more apt to pick them up and eat them because they are small. I think the problem was that many people ate five minis which add up to about one full cupcake but whose counting anyways? Not me!
I think I have had chocolate peanut butter cupcakes on the brain for months, but have not taken the plunge to make them until now. To add decadence to the pot, I added mini peanut butter cups to the batter of each mini cupcake. I had a weak moment in the check out isle at Trader Joe. Why do I feel like I have a lot of these so called 'weak moments' lately? Why can't I crave things like vegetables or something? Anyway...
So the cupcakes are my go to cupcake--deep, rich, chocolately, and crumble in your mouth moist. I have never found another chocolate cake recipe to live up to this one. (And I have made my fair share). Just before I pop the cupcakes in the oven, I throw in the mini peanut butter cup to the top of each one. Mine sank to the bottom--even adding the candy to the top. I think you could remedy this in two ways. One: toss the pb cups in flour then add them. OR Two: toss the pb cups in half way. Honestly, its up to you. I'm not sure if either would work, and I cannot be bothered to open my oven and hang my head in to add morsels in while my face burns. If anyone has a good suggestion--feel free to share ;)
The frosting is a fluffy peanut butter and I must say the perfect compliment to this chocolate cake. Its derived from Martha Stewart and forgive me as I am posting the alteration from memory. Sometimes...not always a great thing. The good news is, you can play with this frosting to your taste. I happened to want something 'less peanut butter' and more frosting with a side of peanut butter.
Enjoy! I know I did!
For the cupcake recipe, click here.
-Alterations: none except adding a mini peanut butter cup to the top of the unbaked cupcake. I also cut the recipe in half which still made almost 40 minis!
For the peanut butter frosting recipe, click here.
-Alterations: I cut the peanut butter down, added more cream cheese, and more confectioners sugar. Don't forget to top the cake with another peanut butter cup!
Pin It
Posted by Sweet as Coco at 6:06 PM

Mini cupcakes are the devil! I know I end up eating at least 10 of them and then realize I ate more than I would have ate if I just had regular cupcakes. Of course I am not complaining.

Smart move bringing them to a gym opening too. Got to keep the repeat business going so they stay alive. Plus just tell people they are low fat. They will never know ;-)

The Bakery Network just stopping by after posting a brief article about the cupcake craze. I will definately try a few of these recipes...anything chocolate and peanut butter has to be great!
If you want to post any of your recipes on my site just go over to www.thebakerynetwork.com/center.php create an account for free and start posting (pictures and recipes). Great blog by the way!
Cheers, TBN