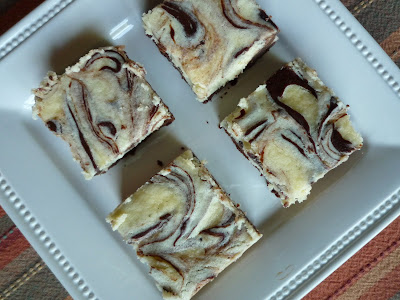 Brownie's anyone? I know, I've been absent. Way absent. I plan on giving you an explanation for all of it, when the time is right.
For now, its TWD, and its Espresso Cheesecake Swirl Brownies, in my case, Vanilla Bean Cheesecake Swirl Brownies!
These were quite easy to whip up. When I think cheesecake anything, I think 'complicated'. But these really werent. In fact, I didnt make them until Tuesday. Yes, Tuesday.
The brownie part was uneventful, easy typical brownie mix. I did take notice that there was not as much butter, chocolate, and sugar I am used to. When I let the batter sit while I made the cheesecake portion, it thickened up quite a bit.
While I am not a huge fan of cheesecake, watching this mixture puff up with its creaminess made me want to eat the batter right out of the bowl. Somehow, I restrained myself. I did make some alterations from the original recipe: I added 1/2 of a vanilla bean, and 1 tablespoon of vanilla instead of the espresso.
Overall, these were easy, and looked absolutely amazing. Taste wise, I can't say I was blown away. The brownie part was a bit dry. However, I must say the cheesecake portion was rather tasty! I may have to try these with a different brownie mixture next time!
I've got some things coming so stay tuned, including more brownies. 'Ta-die-for-brownies" to be exact.
Pin It
Posted by Sweet as Coco at 8:46 PM

I completely agree - the brownie part was rather dry and uninteresting, but I really liked the cheesecake. Beautiful swirling!

Your brownies are lovely and your swirls are perfect!
I’m happy you enjoyed these, I loved them too!

I, too, liked the cheesecake. My brownie layer wasn't dry, but it was pretty tasteless.

whoa!!! those are some of the prettiest darn brownies EVER!!!

Welcome back! These brownies are a great way to return! Dori can do no wrong!

Wow -- your swirls are absolutely gorgeous!